The two main categories of Russian scams are those that a person may be a victim of when they visit Russia, and the Russian bride scams.

The online Russian scams involve a woman [or man] who contacts lonely foreign men through the internet on the basis of seeking true love or a soul mate.

The scammer quickly falls in love with the man and tells him what he wants to hear, usually by sending pre-written letters that are sent to thousands of unsuspecting men.

Once the men are awash with emotion and their logic affected, the scammer invents a reason that requires money.

This can be anything from visa and plane tickets to be with him, a sick parent or an injury themselves that requires medical care, to buy a mobile phone or pay internet expenses, or to fix up the house or an apartment for him to stay in.

Whatever the reason is, they need money, and lots of it!

The main types of Russian scams that operate when you are in Russia include:

These are the most common Russian scams. The pick-picketers looks for a foreigner in a crowded place such as busy streets, train and bus stations, crowded buses and metro/subway areas.

If they are working alone they will get close and bump/jostle you while at the same time trying to remove any items such as wallets, passports etc. If they work in pairs, one will distract you by bumping into you while the other works to steal your valuables.

The lost wallet scam is one of the popular Russian scams and starts with a person in a hurry running past you who drops a wallet or roll of money in front of you as they go past. Before you can pick it up, somebody else picks it up [a co-conspirator] and offers to share half of it with you. You will however need to follow the man to a quiet place to divide up the money [several hundred dollars] such as behind a building etc. When you get there, the person who dropped the wallet or money finds you both and demands the money back.

When the 2 men have gone, you take out the money from your back pocket thinking you have profited from the deal, only to find it is fake! 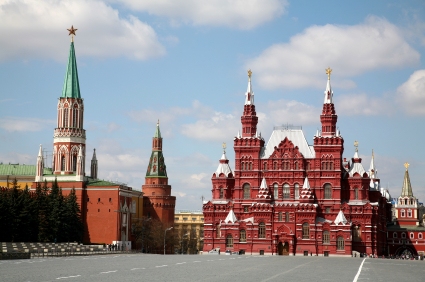 Although this scam is well known, men fall for it regularly. The  con women working this scam frequent bars and nightclubs looking for foreigners. Once they have singled one out, they introduce themselves and socialize with them.

When the man is not looking, or goes to the bathroom, the woman puts drugs in his drink designed to make him drowsy/unconscious and also erase his memory when he come round. The woman and man then go back to her or his place where they chat while she waits for him to go unconscious.

She then robs him of his valuables [and anything else if she is at his place] and about 48 hours later when he comes round, he can't remember what happened but soon finds out he has been robbed.

This Russian scam involves the Police stopping foreigners and asking to see their documents. They often advise there is a problem with the documents, but say they will do nothing if they are given money. They target especially Asian tourists because they are less questioning of authority and prefer to pay rather than have conflict, and are more likely have a reasonable amount of money for the bribe.

The reasons are usually fake as they assume foreigners will be familiar with all the laws.

These Russian scams operate in a similar fashion to the Police scams above - the customs officer finds a problem with your documents - which of course can be fixed for a fee!

They also particularly target Asian tourists for the reasons stated above.

What to Do to Avoid the Russian Scams

Do you have any knowledge or experience of the Russian scams to help others.

Russian Dropped money/Passport Scam Not rated yet
In July I was walking down a street, middle of the afternoon. Man, friendly tries to talk to me in Russian. Fist sign something is up, because he is the …