Is there a Noni scam, or is it miracle juice in a bottle? There are claims it is snake oil or sugary water, a healing potion, and a cure for everything from colds to cancer.

Noni is the Polynesian name for the tree, however its scientific name is Morinda citrifolia. It is also know as Indian mulberry.

Noni is marketed by Morinda, a company founded in 1996 by John Wadsworth after he reportedly traveled to Tahiti and 'discovered' the benefits of this fruit.

Morinda is a Multi Level Marketing company that claims to have several thousand distributors and created 200 millionaires.

When it was marketed, it was claimed to cure all sorts of medical conditions and diseases.

Is Noni Juice a Scam?

However, in its natural state, the pungent, ripe fruit is not very edible and is known as 'vomit fruit' and 'rotten cheese fruit' due to its bitterness.

To sell it, only a small amount of the fruit juice is used and other juices and water are added to make it edible. Like most fruits, the processing removes many of the benefits the original fruit contained, and the pasteurization process  it goes through removes most of any benefits that are left.

Independent laboratory test shows that there is about 6mg of Vitamin C per serving, so to get the minimum daily required amount of Vitamin C would require you drinking 10 servings a day.

To get the required minimum amount of calcium from Noni would require you to drink 50 bottles a day at a cost of about $2,000. It contains only small amounts of B vitamins and very small amounts of anti-oxidants.

So it has very little nutritional value, and no scientific research for any 'miracle' ingredients to support its claims.

With all the health claims that were supposedly attributed to this juice it was inevitable that the FDA became involved.

The outcome was that in 1998 the Attorney General's office agreed to a settlement with Morinda for an undisclosed amount, thought to be in the tens of millions of dollars. The Noni scam was born.

In addition to the settlement, Morinda was required to refund any customer who made a request in writing, refrain from making any claims about the healing powers of Noni juice, and not produce any customer testimonials without proof. 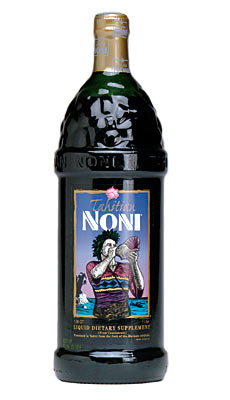 Their claims were unfounded and un-researched, and so it was held to be a Noni scam.

If the Polynesians drank Noni juice as the marketers claim, you would expect the population to experience the curative health benefits.

However, a lot of Polynesians are in poor health. According to the World health Organisation, 50% of women in French Polynesia are obese, and another 30% are overweight.

In some parts of Micronesia, 50% of the population has diabetes and 80% are obese.

Native Hawaiians are twice as likely to get diabetes and 6 times as likely to die from it compared to Caucasians on the islands.

The health experts in these areas are not encouraging people to drink more Noni! In fact there have been several documented cases of people damaging their livers from drinking Noni.